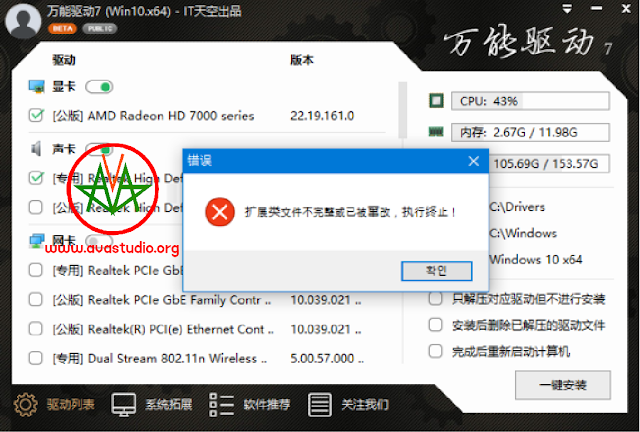 EasyDrv (Universal Driver) is a tool created by IT Sky to automatically install computer hardware drivers. With an easy-to-use interface and accurate hardware device identification, anyone can easily install computer hardware drivers offline. It will also be the best choice for your company's computer installers, systems engineers, and system maintenance personnel to deploy systems.
The collection of driver packages prepared by the IT SKY development team collects and organizes the comprehensive hardware devices currently in use. This package supports the most mainstream hardware, and is mostly compatible with hardware made in the past. EasyDrv is a hardware driver intelligent installation tool that combines ease of use, versatility, accuracy, reliability and efficiency.
EasyDrv is currently divided into public version and VIP version. In case of VIP version, if you register as an official KEY user, bundled promotional software will not be installed. If there is no official KEY, there is no difference in configuration between the public version and the VIP version, and when installing, "2345 Security Program and 2345 Browser" are installed together by default, and the default homepage of the user's browser is also modified to the 2345 site.
▶ If the malicious bundle software file is deleted, it will be executed, but the program will be terminated with an error message window.
(Note: Chinese original, before patch)
Download WanDrv Easy Driver Pack 7.20.818 for Windows 7 - 64-bit
Unlocking Key/Password "avastudio"
Additional patch contents localized: QoiiOX
┗━━━━━━━━━┻━━━━━━━━━━━━━━━━
☞ Even without modifying the ini file, Win8, Win8.1 automatically uses the Win7 driver settings.
☞ Unlike ini files, if you change the executable file name, you can put and use multiple platform drivers in one folder.
#Download #Driver Pack #Windows
Bagikan
Komentar